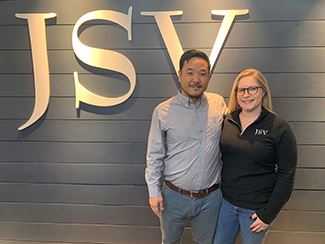 Kristin and Josh Urich are the owners of JSV, LLC, 25+ year construction company based out of Fredericksburg. Their focus is on commercial, residential, and government constructions. The Urichs are second-generation owners of JSV, as Kristin’s father initially founded the company in 1995. JSV is licensed for general contracting in Virginia, Maryland, and Washington, DC, but the Urichs place an emphasis on servicing the local community.

Kristin Urich grew up in the Stafford area, and has been visiting Fredericksburg her entire life. For Kristin, supporting the City of Fredericksburg has been essential to her business, particularly as she has contributed to the extraordinary growth of the city. Josh, originally from Athens, Georgia, moved to Virginia in 2009. He and Kristin met in Leesburg, and quickly began to date. Eventually Josh was offered a job at JSV, and has come to co-own the business with Kristin.

As a family-operated business, JSV strives to treat their clients as if they are family as well. The Urichs prefer to meet with their clients in-person, and like to be fully involved in all of their projects. They believe that interpersonal communication and follow-ups set JSV apart from other contracting firms, and they plan to never lose sight of this focus. Josh said that through the work of JSV, he is already seeing the return on the projects that they have worked on locally.

The Urichs see Fredericksburg as a wonderful city to not only raise their children, but to help in the city’s expansion. According to Kristin, witnessing the economic growth in Fredericksburg, from bustling restaurants to gorgeous boutiques, has been extraordinary. Josh said that the best way to determine how a city is growing is its consistent construction; for that reason, he believes that Fredericksburg is in great shape to continue in its expansion.

“We see this a place that is exciting,” Josh said, “as we see the city literally growing around us.”

The Urichs also see tremendous growth and potential in the Canal Quarter District, the neighborhood where the JSV office is located. As residents of Canal Quarter, they have witnessed how many businesses have opened in the neighborhood, and how it has continued to grow.