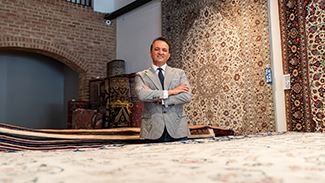 Paymon Matini has owned Paymon FineRug Imports on William Street for 32 years. His world-renowned, oriental rugs are beautifully designed and not too costly. Matini’s life story, however, stretches far beyond his business.

Matini grew up in Iran during the protests of the late-1970s. When the revolution began in 1976, Matini said that he was “suffocated by the news.” The conflicts of the revolution were undeniable and at his front door, but Matini did not let them deter from his future. He migrated to the United States at age 17, with only $50 in his pocket, and eventually became a U.S. citizen.

Matini married his wife, and raised two children in Virginia. As an immigrant to the United States, he felt it important to provide for his kids to avoid the struggles that he witnessed as a teenager; he believes he has succeeded at his goal as a parent. When Matini started Paymon FineRugs, he did not sell any products for three weeks. Terrified, Matini was convinced that his business was finished. But thanks to the diligence that he practiced throughout his life, and thanks to the support of local Fredericksburg residents, Matini’s business was able to thrive, and has continued to do so for over three decades.

Matini finds a number of similarities between the Iran Revolution of the 70’s, and the current protests that are currently happening in his former country. While he did not get into details or opinions of the conflict, Matini is a firm believer of the will of the people. He finds that the people should be prioritized, and wants them to realize the power that they have. He also believes that the Iran protests should make us realize who we are as Americans, and the democracy that we hold dear.

“Democracy is something that we have to earn,” Matini said. “It’s not a pill. It’s not a vaccine.”

According to Matini, one of the best features of his rugs is their longevity. Many guests have noted that they have been able to keep their rug for decades, far outlasting their expectations. Matini said that longevity is what separates his rugs from a rug that one would buy from a department store. His rugs may be more expensive, but they are beautifully designed, and last for a very long time.

Matini believes that America is a country of opportunity for those who work hard. “It’s all about application,” he said, having worked hard to build his business and life. Matini is proof that the American Dream is alive and well, and is a shining example of how immigrants can succeed in both the United States, and the City of Fredericksburg.

Paymon’s FineRug Imports is located on the first floor of 501 William St.