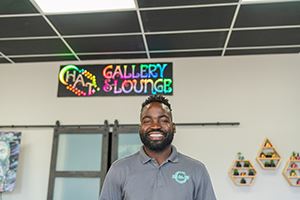 Andre Powell opened HAT Gallery & Lounge on Princess Anne Street as a multi-purpose creative space, showcasing art, performers, and newly released films. According to Powell, after opening HAT Gallery, many people were encouraging him to apply for a liquor license within six months. Powell dismissed the idea that alcohol is required to build a successful business such as his, and believes that HAT Gallery has the ability to thrive with ambience and non-alcoholic beverages.

HAT Gallery & Lounge plays host to a variety of events and artists, recently hosting a DJ and acrobatist. They are open until 3:00 am on Fridays and Saturdays, which Powell said is to provide guests with a mellow place to hangout. HAT Gallery operates as both a workspace and movie theater, as well as other types of events. Powell is open to all creative ideas for his venue, and is thrilled with how often the space is actively utilized.

Since Powell moved to Fredericksburg in 2006, he has witnessed how much the city has evolved. He noted that foot traffic in Fredericksburg was fairly minimal in 2006; now, thanks to major development downtown, Powell is pleased with these innovations. Powell has been fortunate to work and live in many different neighborhoods of Fredericksburg, many of which have grown and flourished. But while William St. and the main entrances to Fredericksburg have changed, Powell noted that not many diverse businesses have opened around those areas. He believes for diversity to flourish in Fredericksburg, these businesses must be showcased throughout the city.; including in the front of downtown.

According to Powell, no one has been more accommodating and generous to HAT Gallery than its neighborhood of the Canal Quarter District. He said that the district is a pivotal example of how much Fredericksburg has grown. Years ago, there was hardly any foot traffic in the neighborhood. Now, thanks to recent re-zoning and a flourishing of new businesses (including HAT Gallery), the district is popular and prominent. Areas of Fredericksburg such as the Canal Quarter District have been shown a generous amount of support in the city, and Powell hopes that some of the less developed and lower income areas can be eventually shown the same sort of development.

Powell has many goals in mind for HAT Gallery, including the lounge serving as a place of solace for those who do not drink alcohol; particularly those with Substance Use Disorder. His variety of non-alcoholic beverages, including some well-reviewed mocktails, allow guests to enjoy themselves without feeling like an outcast if they do not want to drink alcohol. Powell wants people to hang out at HAT Gallery to be a place for acceptance without judgment. He is excited for the endless possibilities that HAT Gallery has to offer.