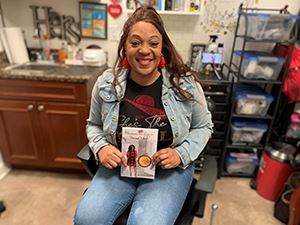 Dr. Crystal Coleman spent eight years serving in the Army. While serving in Desert Storm, Coleman recognized the need for hair stylists throughout the military. She began styling the hair of service members and, while stationed at Fort Bragg, earned her license in cosmetology. “I’ve always been a goal-getter,” Coleman said, noting how she took classes at night while pregnant with her daughter. As CEO of Anointed Hands Hair Studio, as well as her lifestyle brand, She’s the Total Package, Coleman’s goal is to empower people, and to let them know how they can succeed.

“You just have to discover and uncover your gifts within,” she said.

Early on, Coleman noticed how inequality and racial discrimination could impact her career. For instance, she was never approved for a loan or any financial assistance to open her business. However, like any true “goal-getter,” Coleman did not let that disadvantage deter her. She saved up her own money from the military, and opened up her first hair salon. Coleman now styles the hair of Fredericksburg residents, and provides them with the confidence that she believes they should have.

In addition to many other discriminations that minorities face in our society, many black people, and more specifically black women, face extensive discrimination simply because of their hair. For instance, Coleman was only allowed to have a certain number of braids in her hair while in the military. She noted that hair discrimination can also occur within the black community itself, with many people criticizing each other based on having curly or straight hair. Fortunately for many, the CROWN Act was passed in many states, which prohibits race-based hair discrimination. Many hair stylists, including Coleman, are in strong support of this law.

“We were born with natural hair, so I don’t feel like it should be discriminated against,” Coleman said.

With both Anointed Hands Hair Studio and She's the Total Package, Coleman believes her career serves one purpose above all others: confidence. She wants her clients to feel confident with not only their natural hair texture, but who they are as a person. On Saturday, June 25th, Coleman will be hosting Amplify Confidence B.R.U.N.CH. at The Beehive Event Center, which will be a celebration for women in the community. Tickets are available online, and the event will take place from 10am-2pm. Coleman loves having the opportunity to build confidence among the community, and believes that hair styling is the perfect opportunity to build it.

“Our hair is part of our creativity,” Coleman said. “I’m a creative.”