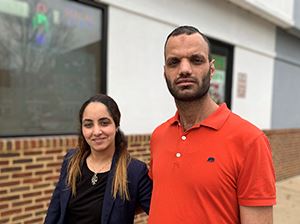 Fredericksburg resident Sihan Fathi has always dreamt of owning her own business. An avid cook, influenced by her mother and grandmother, Fathi recognizes the significance and impact that women have had in her life and career. However, when it came to opening a business, Fathi was worried that her diversity in regard to race, gender, and country of origin, would hurt her ability to succeed. Her husband, Mohamed Ryan, refused to believe that her goal would be impossible. In that spirit, Ryan has extensively supported Fathi in opening her first business, My Wife’s Pizza & MORE.

My Wife’s Pizza opened in 2019, just a few months before the COVID-19 pandemic and quarantine. According to Fathi, while the pandemic caused them to re-evaluate many aspects of their business, it also allowed them to grow and improve. My Wife’s Pizza has opened back up for indoor dining, and their menu has begun to grow past their pizzas. Hailing from Morocco, My Wife’s Pizza will soon be serving a number of authentic Moroccan dishes including tea and bistela, which is served with either seafood or chicken. Ryan says that with the Covid restrictions lifting, people can dine at My Wife’s Pizza to learn both the story of their food, as well as their history.

“We share our food and our everything together,” Fathi said.

According to Ryan, small businesses are the backbone of this nation’s economy. Both he and Fathi believe that starting a business small, with a supportive community, is the key to making their dream come true. When it comes to the community, they are truly thankful for how the Fredericksburg community has supported My Wife’s Pizza. According to Fathi, Fredericksburg has given her business a great chance, and she intends to never let them down.

Owning a business as a woman of color is not without its setbacks. Ryan noted that to be successful in business as a person of color, particularly a woman of color, it is harder to convince people of the possibilities of success. When the two of them tell their story, their ideals can be challenged. But according to both of them, they have always stood by their ideals. The election of Kamala Harris as both the first woman Vice President and Vice Presidential person of color, as well as Ketanji Brown Jackson, the first African American woman nominated to the Supreme Court, give both Ryan and Fathi hope for what they can accomplish.

Ryan believes that the best way for diverse businesses to thrive is through communication. He says that My Wife’s Pizza is focused on communicating their message and story to guests. He knows that this goal will take time, but knows that it will pay off. Both he and Fathi are pleased with how Fredericksburg is growing in its diversity. They pointed out that when they moved to Fredericksburg from Arlington, some friends were skeptical of this town; many of these friends have since moved, or are moving, to Fredericksburg.

“There is a future here,” Fathi said. “This is a small community, but it’s a community that’s gonna give you a lot.”

You can find My Wife’s Pizza at 2010 Princess Anne St, and can currently locate them by the Ukranian flag outside of their establishment. Proceeds from My Wife’s Pizza will benefit refugees from Ukraine, as Ryan believes in the importance of standing against the aggression from Russia.